Solent Towage’s involvement with the stricken ‘Höegh Osaka’ began late in the evening of January 3rd 2015 when one of the Fawley based tugs was called by Southampton VTS to proceed to the assistance of the vessel which was in difficulty at the Bramble Bank.

‘Hoegh Osaka’ is a 51,000ts RoRo owned by Hoegh Autoliners. She had sailed from Southampton earlier that evening but developed a problem during her departure from the port.

On arrival at the vessel it could be seen that she was listing severely and appeared to be aground on the Bramble Bank. The ship’s crew were being evacuated by helicopter and lifeboat leaving only senior crew members and the Southampton Pilot on board. Solent Towage’s initial task was for ‘Lomax’ to push on the hull to keep the vessel in position on the bank over the high water. Tugs from Svitzer Towage’s Southampton fleet were also in attendance whilst a salvage contract was being negotiated between Hoegh and Svitzer Salvage. 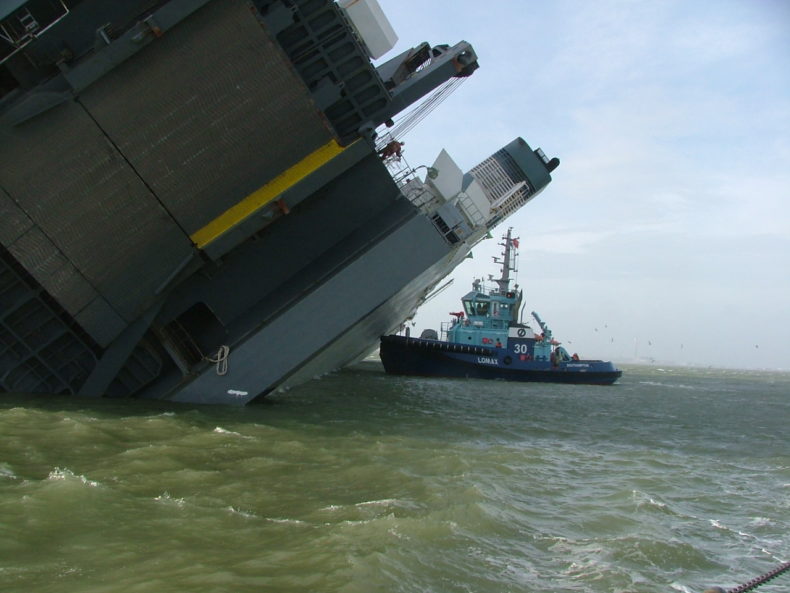 As the high tide approached there was concern for the vessel’s stability so the remaining personnel on board were airlifted off, leaving ‘Lomax’ and ‘Svitzer Ferriby’ holding the deserted vessel on the bank.

At a very early stage Solent Towage took the decision to retain a presence at the scene and began negotiations with the salvors for the engagement of tugs to assist with the salvage operation. Initially two of the group’s tugs were hired – ‘Lomax’, already on the scene and ‘Vortex’ which was dispatched from Ijmuiden.

Over the next three days our involvement included having one tug connected to the stern of the vessel to assist in holding her onto the bank whilst the other was employed as an access platform under the low side of the vessel, permitting salvors to gain access to commence salvage preparations. 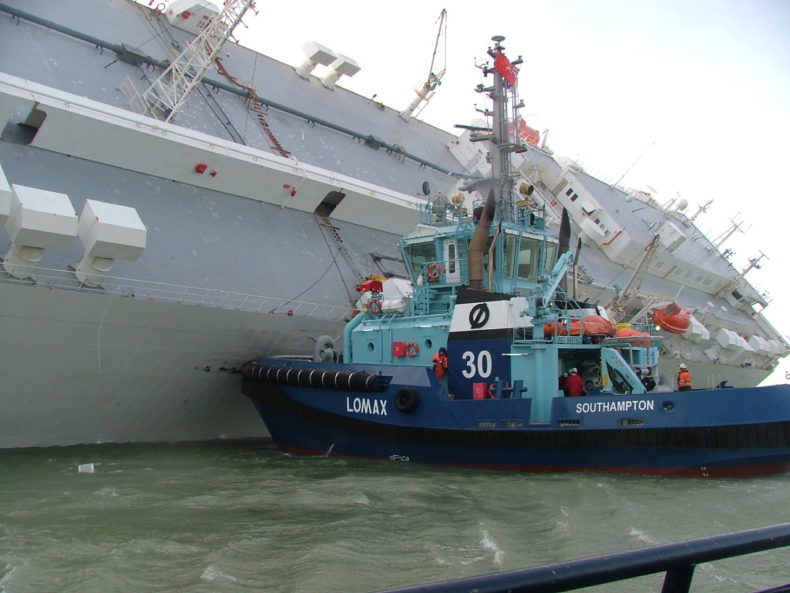 During high water on January 7th the vessel drifted off the bank quite unexpectedly. Fortunately one tug was already secured aft and following some careful maneuvering we managed to get salvors on board to secure a tug forward. The vessel was still at her 52 degree list but stable.

With two tugs secure and two more standing by, the vessel was towed into a holding position in Alpha anchorage, mid Solent, where she would remain until the righting operation was complete. The two additional tugs were one of ours plus one from Svitzer.

Between January 8th and 22nd when the vessel was finally towed into Southampton, the role of the tugs changed according to weather and salvors’ requirements. During this period Solent Towage chartered ‘Multratug 4’ , bringing the total to three for the remainder of the operation.  ‘Thorax’ replaced tug ‘Ginger’ at the end phase of the salvage job. During this period an anchor was laid from the vessel and tugs remained connected forward and aft. 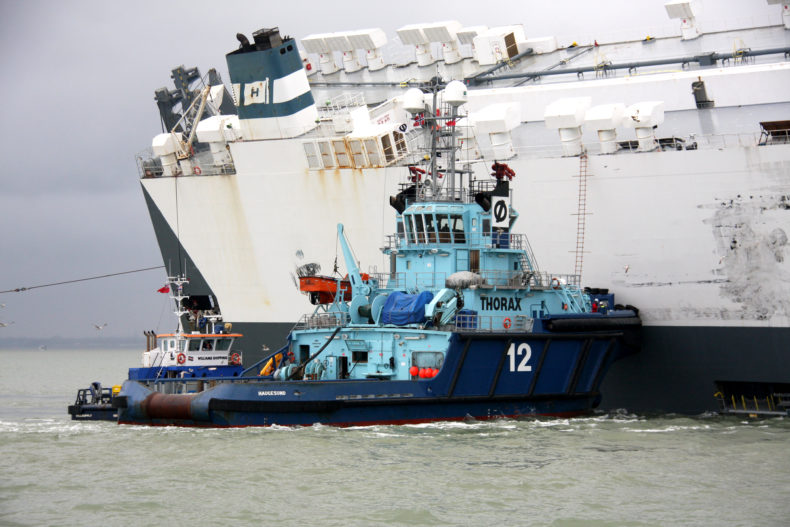 Very poor weather hampered progress for several days. The tugs had to battle with spring tides and the slab side of this 51,000 ts ship acting like a sail in high winds, meaning that full concentration was required on the bridge round the clock. When conditions improved, the task of preparing to deballast and transfer ballast resumed until salvors were content that this could be done and an end was in sight. Both ‘Lomax’ and ‘Thorax’ were employed to provide access into the vessel.

On January 21st the list was reduced to 15 degrees and on the morning of the 22nd reduced further to the required angle of 5 degrees.

The time, weather and tide were right for a daylight passage into Southampton and so early that afternoon the convoy got underway. ‘Thorax’ took the lead with ‘Vortex’ secured aft and ‘Multratug 4’ and ‘Svitzer Bargate’ standing by on each side. 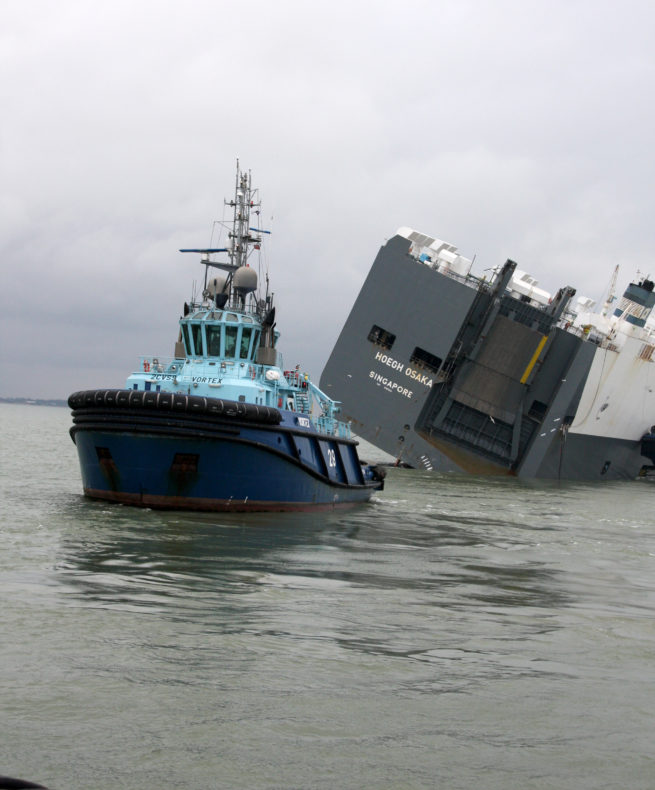 At 1900 that evening the task came to an uneventful end as ‘Höegh Osaka’ was placed alongside in Southampton.

Notable high-lights for Solent Towage and Ostensjo Rederi in this task included, but not limited to – our crews’ professionalism and co-operation throughout, masters’ relationship and communications with the salvage masters, engineers willingness and ability to assist with many and varied requests for assistance from the salvors and finally, but by no means least, the never ending supply of food and drink provided by our Seamen!

Congratulations to all involved. 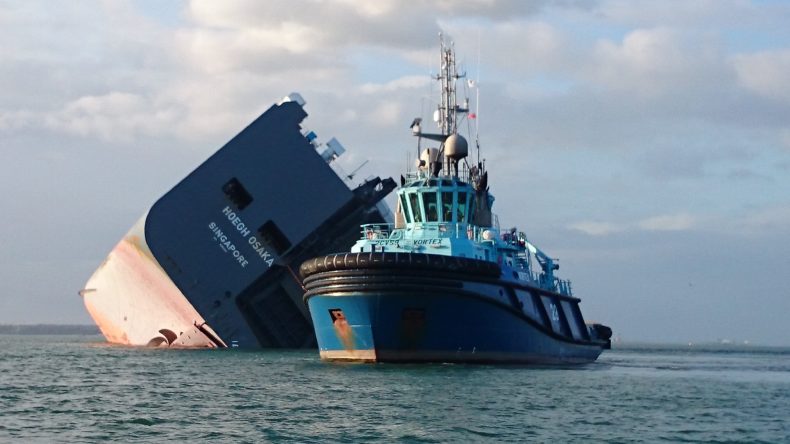 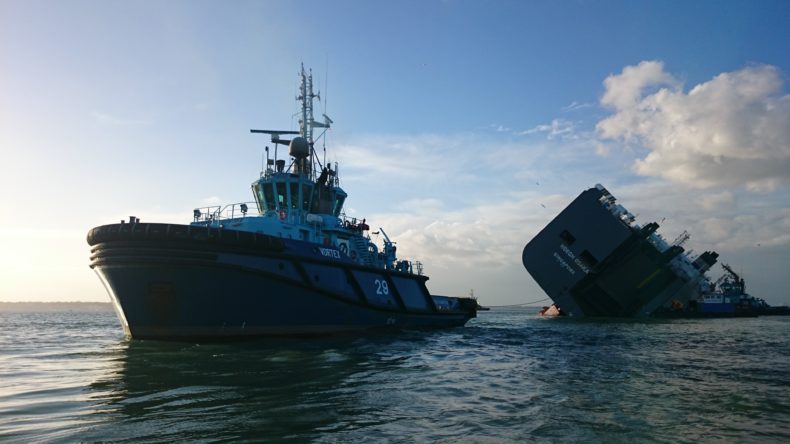